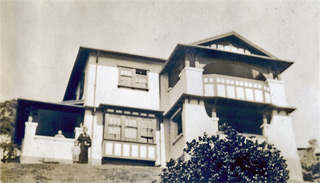 Our family arrived in Sydney from Brisbane in 1933. We moved into a house called Lisdoonvarna in Coronation Avenue, Mosman. It was an extraordinary house and for many years we have been intrigued with its name and history. This has in part been revealed by Mosman Council, who believe “the house was built about 1916, probably by Thomas A Miller”.

Further information on the name was accidently discovered recently. The name comes from a town in Ireland, which was new in the late 19th century and today is a popular tourist resort.

How the house got its name we don’t know. It had separate servants’ quarters, a small ballroom and two tennis courts on a huge “U” shaped block of land. On the lower part of the road lived the Perssons boys, Donald and Conrad, of Scandinavian descent. A little further up lived the Myers family. I believe they were the soft drink people, Mynor. I was given a book, written by their young daughter, of the stories in the Gilbert & Sullivan operettas, Pirates of Penzance, HMS Pinafore and others. I had another friend, Donald Hogarth, who lived a short distance away in Plunkett Street. I think his house backed onto Coronation Avenue, at the time a bush track at the lower end. We had a female cat for a while, which had come in from the bush below us. She stayed long enough to have a brood of kittens most of them dying from ticks. They probably came from the bandicoots, which the mother kept bringing in and killing. She disappeared and left us with two kittens, male and female which our father, Alf, named Thomas and Minnie. Minnie was run over by a car in Coronation Avenue but Tom was a part of the family for 17 years.

I went to Mosman Primary School. There was a tuck- shop opposite the school in Avenue Road. I had a little friend called Wally Hale whose father was an optometrist in Avenue Road, somewhere near the tuck-shop. I have school photographs of classes 4B and 5B classes, in 1936 and 1937, with many of the pupils identified.

My Mother used to shop at Pistola’s butchery in Middle Head Road, where I often had to go and ask for their best short loin chops. There was another shop I used to go to; I think it was a bootmaker’s and the last shop before the houses on the northern side of Middle Head Road. I attended the Congregational Church in Belmont Road, originally in Sunday School and then in Fellowship. After a couple of years Lisdoonvarna went up for sale. I think Dad was interested in buying it but he was either too late or the price was too high and we moved to Effingham Street. 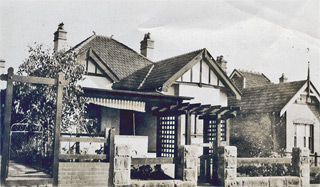 The house was nearly opposite Alexander Street leading to the Mosman Private Hospital which was convenient as my baby brother Peter was born there on 8 November 1936. A referral to the street directory makes me think I could have been wrong as the hospital is in Ellamatta Avenue. There was a brick shed out the back where I found a long bayonet in the rafters, apparently a relic from the First World War.

While we were there I joined the 1st Mosman Boy Scouts as a Cub and progressed to a Patrol Leader, leaving at the age of 17 when studying for the Leaving Certificate. Our Scout Hall was ‘The Barn’ at in Mosman Bay. It is an old whaling station and vertebrae from whale skeletons was part of our seating.

While we were at Effingham Street our parents decided that Mosman was where they would like to put down roots and they bought a block of land at the corner of Stanton Road and Glencarron Avenue on the former site of what I believe was a prestigious girls’ school. 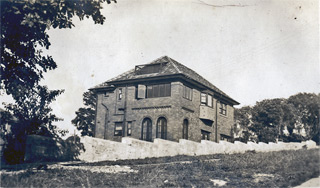 Our house was built there next to the home of the Dekyveres, a well known name in wool-broking and the social columns. As a teenager I considered myself somewhat of a bathroom baritone or tenor. I have often wondered why we didn’t get some complaints from them. They were nice people.

There was a big flame tree and a block of flats below us and I was friendly with a boy from those flats. His name was Bruce Peachey. Our house looked over Balmoral and was our parents’ pride and joy. It had three floors at the back and there was a ladder into the roof which had a lookout with views out through The Heads.

There was an earthen gutter opposite the flats in Stanton Road where we could catch tadpoles and dig out slate clay, which we used for modelling.

At the age of 13 I managed to get myself a bike and soon crashed it into a truck as I rode down Spit Road. It came out of Awaba Street on my left without giving way. I was taken into the chemists near the corner and spent the next week in bed with concussion. My penalty was not to get another bike until I passed the Intermediate Certificate when I was 15.

After the Second World War broke out in 1939 my father enlisted in the RAAF. The enlistment date was 5 August 1940. He was then 41 but very keen to get into Service. I don’t know what caused the delay, possibly because of the difficulty in finding a unit willing to accept him, but I’m sure he had some arguments from my mother. However, he had to make arrangements for accommodation and maintenance of his family. This meant the letting of our house and making some financial decisions. He was not discharged until 22 October 1945. We moved out for the duration of the War. Our home for this time was a rented flat in Shadforth Street, Mosman. 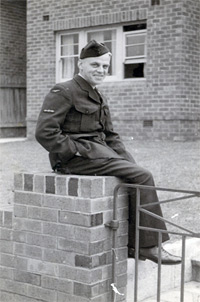 Dad used to come home on leave to the flat at Shadforth Street.

I passed my Intermediate Certificate at North Sydney Boys’ High School, joined the Cadet Corp and played Rugby for the school. I became a N.E.S. messenger or junior warden for the street but I was never required. I remember keeping a scrapbook of the war between the Finns and the Russians but that has disappeared now.

One evening I remember hearing a plane flying over very high. The searchlights were crisscrossing the sky and I caught glimpses of a plane. The next night we were woken by sirens and the sound of explosions, and in accordance with specified procedures, the residents of the flats gathered up mattresses and cushions and stationed ourselves in the stairwell under the staircase. We stayed there until the “all clear”. As you will have imagined it was the miniature sub attack on Sydney Harbour.

In 1945 Dad finished his war service and we moved back into our house in Glencarron Avenue, which had been rented out.

We stayed in Glencarron Avenue this time for about two years while Dad tried to settle down after his war service.

I enjoyed our proximity to the beach, five minutes down the steps at the back of the house, down Edwards Bay Road and I was there; and sailing at the Middle Harbour Skiff Club at The Spit. A neighbourhood friend, Jim Wigram, was a regular visitor to our house.

Then my father bought a property at Greenwell Point on the South Coast and I went out to board.

Dad found me a spot to stay in Avenue Road about 1946.

It was with Ma Prince and her son Rowley in Avenue Road, near Canrobert Street on the western side near some shops. I don’t know the address. Rowley became an electrical contractor in the district.

On a Saturday night on my own or with a friend or two we used to go to ‘The Barn’ at Mosman Bay. ‘The Barn’ was an old whaling station used by the 1st Mosman Scouts for their meetings and on Saturday nights young people made it a site for what we would now call a gig.

Some of Australia’s top jazz musicians would play there; trumpet, piano, clarinet and sax, not forgetting an excellent drummer. They would bring the house down, so to speak. Mr Beggs and his son Doug, who was also in the Scouts, organized all this.

While at Avenue Road I used to travel to work catching a tram to the bottom of Avenue Road to Mosman Wharf and a ferry to the City. It was always a wonderful journey.

I am from Ennis County Clare in the west of Ireland and was educated (in part) in a catering school in Lisdoonvarna village – its quite a remote place and situated in the famous burren region of Ireland, it is famously known for its Bachelor Festival – held I think every September in the village which is also near the world famous “Cliffs of Moher”

There were lots of examples of Irish countys and township names in Australia as many Clare/Irish people emigrated to Australia for better times, indeed Melbourne's former Archbishop Daniel Mannix was a relative of my Grandmothers who was from Charleville in County Cork and I believe the Bishop's house in Melbourne was called Raheen – again another example of an Irish place name in use in Oz – Raheen is a suburb just on the fringes of Limerick city in the west of IRELAND, another coincidence was that I spent 1 year furthering my education in RAHEEN – maybe Archbishop Mannix was just trying to keep Raheen in the family lol lol

It does make me very proud to be Irish when I read of the legacy that was left by the early Irish settlers in Australia – If you are ever in the west of Ireland you might like to know that Lisdoonvarna is approx only 45min drive from Shannon International Airport.

Thanks for your information. My mother’s family (Dillon) came from Crusheen, in County Clare. We tracked some distant cousins down there on a visit to Ireland in 2005, and stayed with them on a second visit in 2008. You are right about the Irish place names and influence in Australia. I am also anh old Mosmanite; lived there from 1947 – 1968, and went to school at Sacred Heart/Marist Brothers.
Slainte
David Healy

I know that this was published so many years ago now – but just in case anyone is still reading the comments, I wanted to say how much I enjoyed reading this now in 2018. I am the great grand-daughter of Bill Pistola of Pistola’s butcher on Middle Head Road that you mention in this piece. It was lovely to see it mentioned.