Mosman during the 30s and Depression Years

My family moved from North Sydney to Mosman’s Esther Road, Balmoral in about 1922, when I was four years old. Mosman was a wonderful place to move to, especially Balmoral, a very natural place with beautiful beaches, sand dunes, pines, fig trees and small lagoons. There was also a beautiful ‘island’ and Peggy’s Rocks, both surrounded by water at high tide. Later, a promenade was built, which made a big difference to the area. A rotunda was built for the use of bands and a bridge was extended from the promenade to the island. Trams ran from Balmoral to North Sydney. They used to have to shovel the sand off the tramlines after heavy winds and rough seas, though this was helped by the promenade being built.

There were lots of vacant land surrounding the area and homes with orchards of various types of fruit growing and we used to buy fruit from these places to make jam. My family had a large backyard and in this we kept poultry and grew vegetables which helped us a lot during the Depression years. Large areas of blackberry bushes also helped us by making jam and pies.

Where the Balmoral Oval is now there was a large, depressed area of land and a small lagoon which was turned into a tip by the Mosman Council for the disposal of all rubbish. Horses and carts were used to fill the area. I still remember the name of one of the drivers, Len Wylie. It was great for us later, as we used to get lots of vegetables, watermelons, pumpkins and other leftovers. Close by was a boatshed and shop, owned by Jack Joel and his wife Esther. They used to hire out boats and sell lines and fishing gear.

At the corner of Botanic Road and the Esplanade there was a two story building called Braemar Guest House and alongside was a very large area used for picnics called ‘Happy Land’, with a large hall used for dances and parties. The Sydney ferries used to run from Circular Quay to Balmoral at weekends with huge crowds of people arriving. Later this area was turned into tennis courts by Fred Scarsbrick, who formed the Balmoral Tennis club. At the north end of Balmoral an amphitheatre was also built for religious purposes and seats were sold facing the east. Later it was used for concerts. Now it is occupied by units. 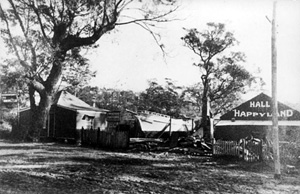 Just nearby was Wyargine Point and during the Depression some young men out of work used to gather and sun bake on the rocky point. They built a rock pool that they called ‘the fraz’. They all were very brown and enjoyed life on the dole. At the southern end of Balmoral was Middle Head, where there was a golf course with two lovely beaches on either side, Cobblers Beach and George’s Beach. Many families used to walk over there for picnics. During the Depression years a lot of the families had a hard time. Some were on the dole, others were on two or three days work a week (at a rate the same as the dole). My mother used to work doing ironing and washing and my father worked for two or three days each week. After school I used to work in a butchers shop and got paid in sausages. I also worked for a baker delivering bread with the payment of a loaf of bread and I gathered bottles at weekends to sell to the bottle’os. Most families had to scrounge to make ends meet.

I left school when I was 14 years old for a job that I was offered. I was very lucky to get a job during the Depression and was the envy of many people at the time. I started work as an office boy at seven shillings and six pence a week. Later I became a cutter making things such as ties and dressing gowns and the wages were much better. I used to walk from Balmoral to Mosman Bay to catch a ferry into town and then back home at night, to save money. We had to work 44 hours a week then. The great champion boxer Dave Smith had a shop on the corner of Almora Street and The Esplanade. I remember him as a great man who used to help us a lot, teaching us to fight and defend ourselves.

A number of other aspects of Mosman may be useful:

Where the naval depot is now was a sewerage plant for use by Mosman Council. Later Walter Cavil bought it and made it into a swimming pool known as Cavil’s Baths. It was later taken over by the Navy.

Mosman was a very good sporting area with cricket, football, tennis, hockey, sailing, swimming and many other sports. The area had many champions come from a number of these sports and it was very encouraging for the young people of Mosman to participate.

The members of this society largely came from Mosman and the surrounding suburbs. Although amateur, they were taught by the talented Mavis Sykes and were a very professional unit, putting on wonderful shows which were held at the Mosman Town Hall and the Cremorne Orpheum Hall. The productions they staged always attracted large crowds to see them. During World War II years, the travelled around to various places to entertain the services. They were greatly appreciated and will always be remembered by their wonderful shows and for the voluntary work they did.

My father, Fred Wilson was one of the boys who built the Fraz during the depression and it was here he met my mother, Marie. Dad,s name FRED is carved in a rock adjacent to the fraz and is still very clear and visable. I scattered dad’s ashes at the Fraz in 06.

Wonderful story about growing up in Balmoral. Have heard so many stories from there as my mother Esther Joel grew up there. She wasn’t Jack’s wife by the way Tillie was. My mum lived in that house beside Happy Land. Her father Charles Joel built 2 schooners there.

Fantastic story and photos! My great-grandfather Frederick Mallinson, architect and builder, designed and built quite a few of the properties in this area, including 195,193 and 191 Raglan St adjoining Gibson St (Penhope and Dallington were two of these houses; also of interest to Ted would be Balmahome in the inner 90-degree bend of Esther Rd). I thought he had also developed and later sold the tennis courts pictured, though the story mentions a different Fred. Mallinson certainly applied in 1920 to build a tea room, lav and dressing sheds there. Yet to confirm, but I also believe he built the four flats and shop now occupied by Bottom of the Harbour – He certainly made an application to build them for owner G McGirr or McGiss. He may have built something for a Rattray in Trewyn St. I am still in early stages of research and would appreciate further information.

No one ever mentions the two men who lived in one or two caves at the beach end of Stanton Rd during the depression. There was a track from the end of the road to the beach. Coming down,the caves were on the left and opposite there was a small wooden bungalow where we used to get hot water for tea and they may well have helped the men supplement the dole; we could make a fire on Peggy’s Rocks and
Toast potatoes in the ashes. As children we would run past the men in their caves. The other thing never mentioned is the 6 or 7 men and I suppose women who lived on Chinaman’s Beach during the depression in white painted canvass “houses”.