In 1911 my grandparents, James and Martha Mulligan, sold their country property “Woodford”, near Armidale, NSW. Their son had died of pneumonia aged 6 and as the other children were all girls, and at the time it was not considered an option for women to run a property, they came to Mosman. 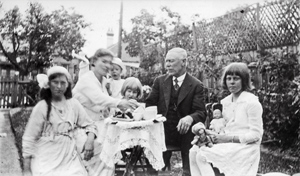 Mulligan family enjoying afternoon tea in the garden of "Sebrof".

They stayed at the Monterey Guest House in Mosman Bay until they bought 14 Clifford Street. The house had been built by a family from Forbes and was called “Sebrof”, which is Forbes spelt backwards. It covered two blocks of land and was built of convict hewn sandstone with a grey-mauve slate roof. Being a late Victorian house, there was a tiled verandah on three sides with french windows opening on to it. The girls used to sleep on a side verandah, as at the time it was considered healthy. A tiled hall (similar to the tiles in the Queen Victoria Building) ran the length of the house, off which ran large, high-ceilinged rooms. The kitchen was at the back of the house as were the laundry and toilet, which were accessed externally. Adjacent was a tiered fernery containing specimens such as maiden hair fern, which were fashionable at the time.

There were stables at the side of the house, in which they housed their Napier motor car, which had been the first car ever purchased in Armidale. A small orchard and vegetable garden caught the sun on the north side of the house and were home to the clothes line and various named pets, including a goat which sometimes ate the washing, chickens and cats. Martha, who was a keen gardener, carefully tended all the gardens and had beds of hydrangeas, fuchsias, agapanthus, shasta daisies, roses and lilies. The front garden had two symmetrically placed palm trees and a trimmed plumbago and orange flowered hedge. James often went to auction sales and came home with sculptures for the garden, including two white lions which guarded either side of the front steps, and two white life-sized classical female figures which stood on either side of the front lawn.

As the children left home in the 1930s, the house was divided. James and Martha moved into a small flat at the side and the main part of the house was let to the musician/composer Horace Keats and his family, who later moved to Cobbittee Street. Our family sold the house in the late 1940s to the Chadwick Family. Unfortunately the house was demolished in the 1960s to be replaced with a block of units.

On the rear property in Punch Street was the mechanism for the tram cars which ran from Spit Junction. There was an ice-skating rink at the top of Clifford Street, which later became a picture theatre and on the opposite corner there was Kerslakes Chocolate Shop, which later moved to Military Road.

The house next door was owned by a brother and sister, Roy & Dossie King. He had been wounded in the First World War and had a metal plate in his head and was always seen wearing a white skull cap. They owned a very vocal sulphur crested cockatoo who entertained the local children. This house was unusual in the street because it was two stories high, as can be seen in the photographs kept at the Mosman Historical Society. Further down the street lived the Clancy Family, who had a furniture shop at Spit Junction and over the road lived the Noble Family in a federation house.

You knew it was time to recycle your bottles when you heard the cry of “Bottle o” coming from a horse and cart in the street and there were also cries of “Rabbit o” and “Clothes props” (wooden props for bracing the middle of the clothes lines at the time).

Hi Jill, Just wondering if James Mulligan was descended from Robert and Annie Mulligan that came out on the “Argyleshire” in Nov 1840

Hello everyone, just had email via the site from a lovely ex work mate from long ago, Steve, many thanks, this is a lovely site, he reminded me of the names of friends long gone, and memories of our time together, so i have had a nice gift from the past, lets keep up the good work, terry.

Hi does anyone know how I can find the names of the people who ran the Monterey. My grandmothers single sisters, Eda & Jean Cooper, were apparently Managers at one time early in the 20th century.

Hello, I used to have a dear friend called Stewart George, who worked for A tobacco firm, Egberts I think, a most charming man, he taught me how to fish Australian style, we used to go out at nights on the rocks, he used to fish away from me and I only knew where he was by the scent and sometimes the glow of his pipe, a truly lovely bloke, I shall never forget him.

My family lived in Monteray in the mid 1960’s,when it was a guest house.We also lived in 5/4 Clifford St a few years later.
We came to australia on the Castelle Felici in 1964

Hi there,
I reside at 14 Clifford St in one of the 1960’s flats. I do love reading about the history of this site, & although I lament the demolition of the beautiful 19th Century sandstone house, I am one of the grateful recipients of this demolition, so I cannot complain. Recently we had some plumbing done in the front garden & the plumber was seen to acquire some beautifully dressed sandstone from the site, no doubt it was some leftover sandstone blocks from the original house Sebrof. What a clever little plumber. I wonder if there is any more of it lurking beneath the front lawn. We like to think we have one of the nicest gardens still left in Clifford St. cheers Miranda.